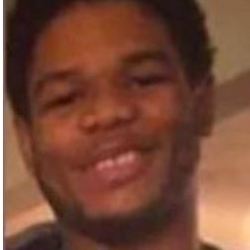 A Detroit police officer fatally shot a suspect Monday afternoon on the city's west side after an attempted traffic stop quickly led to a crash, foot chase and struggle, police said.

The suspect, a roughly 25-year-old man, was pronounced dead at the scene, and the officer was not injured, Detroit Police Chief James Craig said in a Facebook Live video. The incident started as police saw the green Pontiac Grand Prix speeding at about 1:30 p.m., northbound on Broadstreet at Collingwood.

Just as police activated their emergency lights, the Pontiac crashed into a pole at Broadstreet and Elmhurst, and the driver exited and ran. An officer followed him about a quarter-mile to an area behind an abandoned home.

"The suspect lunged in the direction of the officer," Craig said. "The officer, who was in the process of re-holstering his weapon that was out, fired one shot."