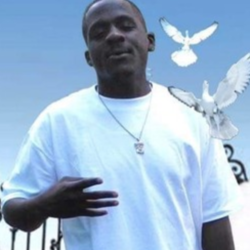 The shooting happened just after 1:00 AM near the Premier Lounge at College and 22nd.

Crime scene tape and evidence markers on the ground outside of Premiere Lounge are raw reminders for Rosie Davis of where her son’s life tragically came to an end.

“It’s very emotional, I haven’t had any sleep, I haven’t ate anything, right now I just don’t know if I’m going or coming right now,” said Davis, the victim’s mother.

As tears fall from her eye, the emotional mother recalls how she first found out about her son’s death.

“Someone came to my house banging on my door around 1:30, she did the motions like, come on, come on your son has been shot,” she described. “The police shot your son, come on, come on. I said oh my God, are you serious, so I just ran out and they took me to the scene.”

When she got to the scene, she saw Davis lying on the ground shot to death.

“I went to the scene, I just, just got weak,” she recalled. “I started getting sick and started throwing up, I just cannot believe what I seen. I could not believe it.”

Davis said her son was shot a killed one week before his 25th birthday.

“He been shot six times,” she said. “In his spine, the chest, the back, and in the stomach. Six times, they shot him down.”

A city spokesperson said officers were called out to the area to check on a disturbance just as the lunge was getting ready to close.

At this time, investigators aren’t saying what may have caused or led up to the shots being fired.

However,a city spokesperson said a weapon was recovered at the scene.

The family will hold a vigil for Davis on Sunday at 5 o’clock.

Since this shooting involves a police officer, the Mississippi Bureau of Investigation has now taken over the investigation.

A city spokesperson said the officer was wearing a body camera when the shooting occurred.

Investigators will take a look at that video during their investigation.

This is Columbus’ second officer involved shooting in the past two years.

Both incidents involve a white officer shooting and killing an African-American male.

Former CPD officer Canyon Boykin was indicted on a manslaughter charge after allegedly shooting and killing Ricky Ball while on duty in 2015.

Mayor Robert Smith and police chief Oscar Lewis are asking the public to remain calm and not jump to any conclusions while this current investigation plays out.

“We have no reason to camouflage, or cover-up, or hide anything concerning what occurred last night,” said Mayor Smith. “It was an unfortunate incident that occurred involving an officer and one of our young citizens within the city. We regret what happened, and we can assure you as we receive information, we will be transparent and we will be open concerning the process.

This was a terrible tragedy,” said Chief Lewis. “Lives have been changed forever, and we just ask for calmness and patience from the community as this investigation plays out.”