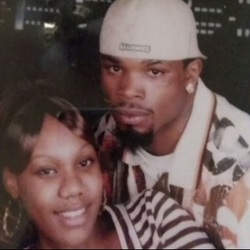 On Saturday, before noon, police in Vineland were dispatched to a quiet residential street, where 37-year-old Rashaun Washington, of Bridgeton, New Jersey, had been sitting on a porch. Police say a caller requested law enforcement to investigate a man “acting suspiciously.”

Before long, Washington was surrounded by droves of officers. Shirtless and wearing shorts, he paced back and forth, as seen in footage of the incident recorded by passers-by.

“Pacing right here. He’s pacing right here in this driveway,” said Jose Pagan, who was among those onlookers who recorded the episode. “In front of everybody. All these people watching with their cell phone,” he said.

José Pagan describes the police shooting of an unarmed man near his home in Vineland. (Emma Lee/WHYY)
Pagan said Washington was holding an empty water bottle. He said police were screaming at him and pointing heavy rifles at Washington. After minutes of pacing, Washington then starts running. It is unclear if he was trying to flee or charge at police. As he is mid-stride, an officer shoots him three times.

“Oh my God, they just killed him,” a woman who goes by just RiRi says in a video of the shooting she posted on Facebook.

When he dropped, police allowed their patrol dog to attack Washington, and authorities administered pepper spray on him, Pagan said.