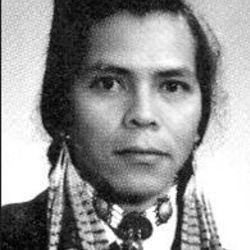 State police have identified a trooper who shot a man to death and critically wounded another after a high-speed chase in northern Idaho.

During a press conference Friday, Idaho State Police Capt. Lonnie Richardson said one of the suspects knocked trooper Jeffery Talbott to the ground before he shot both of the men. Talbott is on paid leave.

Authorities say the May 18 chase began with an attempted traffic stop for drunken driving and ended when Randall Vernon Ellenwood, 50, and Ricardo Daniel Rodriguez, 37, got out of the vehicle and confronted Talbott.

Ellenwood died at the scene. The FBI is investigating the shooting because the chase began on the Nez Perce Reservation and Ellenwood and Rodriguez are tribal members.

Randall was a dedicated father, uncle and grandpa. He was very proud of his Nez Perce heritage and was actively involved with pow wows, sweatlodge and hunting and fishing. He also spent time camping out at Mud Springs encampment year after year. (Tac Titooqan News, June 2009)