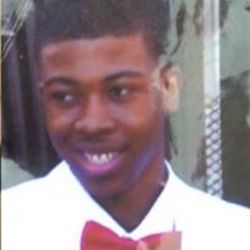 Quintonio LeGrier, a 19-year-old NIU student, and Bettie Jones, 55-year-old mother of five, were shot at about 4:25 a.m. in the 4700 block of West Erie as Chicago police officers responded to a call of a domestic disturbance, according to a statement from the Chicago Police Office of News Affairs. According to police, when they arrived, they were confronted by a combative individual, resulting in an officer firing shots and killing Jones and LeGrier The Cook County medical examiner's office said the two were pronounced dead at different area hospitals within an hour.

Neighbors and family members at the scene said that the domestic disturbance stemmed from LeGrier threatening his father with a metal baseball bat. He was a sophomore honor student at Northern Illinois University studying engineering. LeGrier's mother said he developed a mental illness in September, but said that he was not violent.

The family of Bettie Jones has filed suit against the City of Chicago alleging false reporting by police in the case.

On January 25, 2016, audio from the 911 calls was released, revealing that LeGrier made three separate calls to 911 requesting assistance before police arrived and shot him to death.

On January 28, it was reported that Officer Robert Rialmo’s attorney, Joel Brodsky, will be filing a civil suit against LeGrier’s estate for assault and for causing “emotional distress,” according to reports from CBS and WGN.

On December 14, 2017, City of Chicago attorneys decided to call off a planned emergency hearing seeking a judge's approval of a lawsuit against the estate of Quintonio LeGrier. The proposed lawsuit claimed the teen was responsible for Bettie Jones' death who was also killed by police gunfire during the incident.

February 2017 No charges for killer cop.

Two years after the killings, the Civilian Office of Police Accountability (COPA) ruled the Chicago shootings of Quintonio LeGrier and Bettie Jones unjustified in December 2017.

In June 2018, all 12 jurors in the wrongful death civil lawsuit by the LeGrier family ruled that Officer Rialmo feared for his life, trumping any general verdict that the death was still wrongful.  As a result, the family was not awarded any monetary reward for damages.

In May 2019, the police union planned a fundraiser for Rialmo, including a raffle for guns. The Chicago Tribune reports that according to a notice for the May 10 event at the Chicago Fraternal Order of Police union hall, a $20 donation gets ticket holders into the raffle and a chance to win a gun, rifle and an iPad.