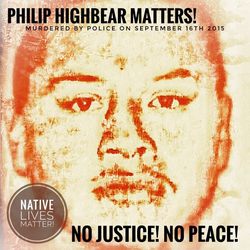 Phillip M. High Bear Sr., age 33, of Eagle Butte was arrested on Sept. 15 for being intoxicated and thrown into what is known as the drunk tank, where inmates sleep on cement floors without mattresses and bedding.
CRST Lieutenant Chad Olson reports that Phillip was discovered in his jail cell with shallow breathing and was transported to the Indian Health Service hospital in Eagle Butte.
Paula Mae High Bear mother of Phillip said she was in Sioux Falls when she received a call from a doctor at I.H.S. that she needed to come and identify her son who was brought in unresponsive from the CRST jail and later died.
“He said when they brought him in he was unresponsive. The doctor said he worked and worked on him but was not able to revive him,” she said.
When Paula Mae and other family members went to the funeral home, the funeral director told her to be prepared when she sees him because he has a lot of bruising.
“He was all beat up,” she said tearfully. “They (CRST police) picked on him all the time. They beat him up twice before. He had long beautiful hair and he said, ‘Mom I want to cut my hair so they will stop pulling my hair.’”
She said witnesses came forward and have told her that when police officers arrested Phillip he was maced repeatedly and drug on his stomach. Another witness told her that several people were hollering at police officers to stop.
However Olson denies Phillip was beaten by police officers.
“That is not true,” Olson said. “There is no facts or anything. I know what people are saying and all I can say is, it is not true. It will all come out in the investigation.”
Olson said the case is under investigation by both the Federal Bureau of Investigation and the Bureau of Indian Affairs Internal Affairs.
Phillip is survived by one son, Phillip High Bear Jr., of Rapid City; one daughter: Sonique High Bear of Dupree. His father is Timothy High Elk, of Ft. Yates, N.D.
Phillip was laid to rest at the Episcopal Cemetery in LaPlante on Wed. Sept. 23.