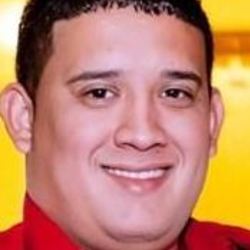 Two HPD officers were off-duty and working an extra job as security at the eatery when two groups of people were asked to leave following a disturbance, said Kese Smith, an HPD spokesman. After the people went outside into the parking lot, Smith said, a woman told one of the officers that one of the men had a gun.

Smith said the officer saw the man in the parking lot. The man had his hands behind his back. He turned toward the officer, who saw he had a gun. The officer repeatedly told him to drop the weapon, but the man walked toward another man, who walked away from him. Then the armed man raised the gun and pointed it at the officer. That's when the officer fired more than once, wounding the armed man, Smith said.

Confronted by the off-duty officer, Garcia allegedly refused to drop the weapon, advanced on the officer and pointed the weapon. He was then shot dead. Houston police failed to name him during a subsequent media release. The Harris County Institute of Forensic Sciences also confirmed Garcia’s name.