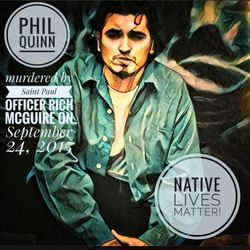 Philip Quinn, 30 years old with a history of mental illness, was shot and killed by police on Thursday night, September 24, 2015 in St. Paul’s West End. According to police, at the time of his death, Quinn was armed with a screwdriver and had failed to obey police commands.

The shooting occurred after police were called about 6 p.m. Thursday to a house in the 600 block of Canton Street, where Philip Quinn lived with his fiance Tareeq. When Tareeq arrived home from work early Thursday morning, she said she realized Quinn had stabbed himself several times with a sharp object. She called his cousin to try to help her get Quinn to eat and take his medication. When he locked himself in the garage, Tareeq said, she called 911 for a medic.

When police showed up, Quinn fled, and they were unable to find him. He returned home about 5 p.m. and called his mother, who called 911 as she headed to his house. At one point after Tareeq went in the house and came out again, she saw Quinn standing in the front of the drive with a screwdriver in his hand and several officers near him. Tareeq said police ordered Quinn to drop the screwdriver. She then heard several pops and realized that he had been shot. Quinn’s mother also saw the shooting. Police identified the officers involved as Joe LaBathe, an eight-year veteran, and Rich McGuire, who has been with the department for seven years. McGuire shot Quinn. Both officers are on standard administrative leave.