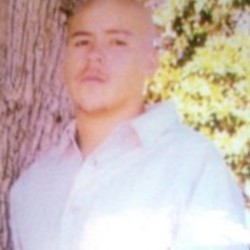 Pedro Renteria, a 21-year-old Latino man, was killed during a confrontation with police at 1418 W. 225th Street in LAPD's Harbor area, and died at 9:42 p.m. Thursday, April 26. Renteria died after a police chase.

LAPD Harbor gang officers were patrolling near Halldale Avenue at about 6:40 p.m. that night when they were told there was an armed gang member in the area, wearing a blue hat and a blue shirt.

Nearby, they spotted a man matching the description -- Renteria. He and his two companions ran away, and the officers followed. Renteria ducked inside an apartment building and tried to escape by climbing out an opposite window. He was carrying a gun, and pointed it at the officers as he came out, they said. LAPD Harbor Officer Daniel Robbins, 36, fired at him. Renteria retreated back into the building. SWAT officers surrounded the building and eventually found him dead inside, an apparent shooting victim. He was found with a loaded handgun.