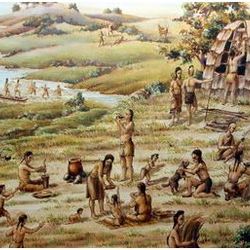 This Date in Native History: On September 15, 1655, the simply named Peach Tree War was a reaction to a decade of abuse suffered by Natives in the New Netherlands.

In the original documents of the New York area, Natives were referred to only as barbarians, savages or heathens.  Settlers made constant complaints of livestock stolen by Natives, or encroachment on now Dutch property that had been their homeland for more than a millennium.

Some of the encounters were almost humorous, such as when few offended traders of the Dutch West India Company recounted an incident with the Raritans, who mocked the traders after they came on board the trader’s ship. The Raritans had brought squirrels on board and were “offering to sell them to Cors Pitersen and at the same time, they slapped him with them.”

The nervous traders found themselves running aground in shallow water, and the Raritans followed in canoes. The Raritans “came over, lifted the kedge, and running alongside of the yacht tried to tow us back to the aforementioned place, annoying us very much.” The Raritans asked to be brought to shore, but the traders said, “You have canoes, row yourselves ashore.”

The area that became Rossville in Staten Island was originally inhabited by the Raritan Indians.

One of his first actions, on September 15, 1639, was to demand a tax from Natives for their protection. Then came Keift’s accusation that the Raritans had killed some farmer’s swine when it was well known that the livestock had been killed by whites.

Using the swine as an excuse, Kieft gathered 100 armed men and attacked and killed several Raritans, including a sachem. Keift believed he would be seen as powerful, but was surprised when several tribes retaliated by burning a farmhouse and killing four people. Thus began Keift’s War, one of the most horrific in United States history.

By February 1643, Keift’s War slayed Natives as they were found, and bounties were offered for heads, especially of Raritans.

Good relations between the Dutch and the Natives ended with the arrival of Willem Kieft in 1639.

“It is said that De Vries watched the fighting and flames from the wall of Fort Amsterdam. He reportedly told Governor Kieft, who had remained in safety, that he had commenced the ruin of the colony. Kieft ridiculed De Vries. When the Dutch troops returned to the fort with 30 prisoners and the heads of a number of Indians on their pikes, he shook their bloody hands delightedly, praised them and gave them presents. The soldiers, it was reported, also used the severed heads to play kickball.

“The Wappingers retaliated with the assistance of the Hackensack and Tappan tribes, and attacked outlying Dutch farms and settlements. The Dutch withdrew into Fort Amsterdam. Kieft prepared for a prolonged siege by sending troops to seize corn from the Metoacs. Three Canarsees were killed and the war spread to the Metoacs on western Long Island.”

Twenty tribes joined the effort to defend Long Island, but the English and Dutch combined their forces to destroy Native villages, killing thousands of Natives along the coast. The Wappinger War, one of the least known and most horrific of slaughters of Native peoples, almost annihilated the tribe.

The Dutch settlers were terrified of retaliation, and left their homes in the furthest reaches of New Netherlands to move closer together and form villages in hopes of safety. Captain David DeVries, a navigator from Holland, hoped that all was not lost and implored 18 Metoac sachems to meet with Keift.

A detailed peace treaty was arranged that read: “All injuries to the Dutch and by the Dutch to them shall henceforth be forever forgotten and forgiven. They promise mutually not to molest each other any more in the future…”

While the sufferings of the Dutch are well documented in the New York reports, only occasional references allude to the horrors and indignations suffered by the tribes. Reading the reports leads one to believe all was well and there were only a few minor outbursts with little loss of life. In fact, in 10 years, settlers complained of only 14 deaths by Natives.

A rare Council letter alludes to the treatment by the Dutch. Written June 16, 1643 by Arent van Corlaer, director of the Rensselaerswyck, who was visiting the Mohawks, said he brought presents asking for the return of captives. The Mohawk said, “We shall show you every kindness in our power, but on this subject you must be silent. Besides you know how they treat our people when they fall into their hands.”

The Dutch population increased from 2,000 to 10,000 in the same years and the Native’s diminishing land and cornfields were raided by settler’s livestock.

By September 15, 1655, when Cornelis van Tienhoven shot a Native woman for stealing a peach, the situation was ripe for an unleashed fury. While Peter Stuyvesant, who replaced the universally despised Willem Kieft, was away from his headquarters in New Amersterdam, 500 to 600 Natives descended upon Hoboken, Pavonia, and Staten Island, attacking New Amsterdam and burned down the homes and farms of hundreds, killed 100 Dutch, and took 150 hostages. It was said it would take decades to repair the damage to the settlement.

A year later, the 1655 Council documents describe the final large scale Dutch-Indian hostility. “Whoever considers only his last transaction with the savages will find, that with clouded brains filled with liquor, (van Tienhoven) was the prime cause of this massacre… he has laid the first foundation… and given the most offense by killing one of the squaws for taking some peaches. If this is true, then we wonder (why) no more mention is made of it, and (why) he has not been brought to justice as a murderer…”