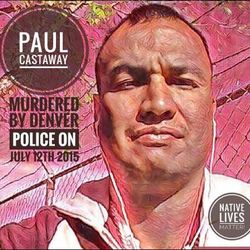 Paul Castaway was shot four times by police and died of his gunshot wounds after his mother called police to help during a schizophrenic episode. Police contend that Castaway, 35, got “dangerously close” to officers with a knife, causing them to open fire. But according to eyewitnesses, Castaway was holding the blade to his own throat moments before he was gunned down. Footage from nearby surveillance cameras is now in the hands of the Denver Police Department.

Paul Castaway is a cousin of Raymond Gassman who was shot by police and died in February 2016.

A photo of Denver Police Department officer Michael Traudt shows a tattoo on one hand that duplicates the logo of the 3 Percenters, defined by the Anti-Defamation League as an anti-government militia group.

Traudt, the target of a wrongful-death lawsuit over the 2015 killing of Paul Castaway, a suicidal man who was wielding a knife when the officer fatally shot him, says he is neither a member of the 3 Percenters nor anti-government, and insists that he's been planning to cover the tattoo to avoid anyone wrongly assuming that he's affiliated with the group.

On September 14, 2015, the Denver District Attorney's Office announced it would not file charges against the officer who shot and killed Castaway. The prosecutor also released video of the shooting which is embedded below.

On July 11, 2016, Castaway's mother filed a federal lawsuit against the officers and the police department alleging use of grossly excessive force.

Family members also are disputing police reports that Castaway had stabbed his mother in the neck before he was killed by police. They gathered outside Denver Police Department headquarters early Tuesday evening to protest the shooting. Afterward, a group of about 40 protesters marched from the station, along the 16th Street Mall to Union Station. Two protesters were arrested, police said: One woman for failure to obey a lawful order and one man for interference/pedestrian in a roadway.