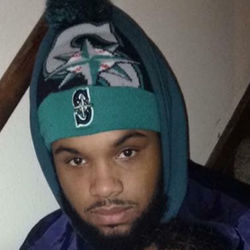 According to the Portland Police Bureau, the two officers who fired at Kimmons early Sunday morning believed he had been involved in a nearby shooting that left two people injured. Those officers are Sergeant Garry Britt, a ten-year PPB veteran, and Officer Jeffrey Livingston, a one-and-a-half-year veteran of the Bureau. Britt has fired his gun at suspects in the past, including a man who aimed a rifle at Britt and another police officer in 2013.

Britt is also the first officer who interacted with John Elifritz on April 7, the day Elifritz was fatally shot by PPB officers in a Southeast homeless shelter. Britt responded to a 911 call Elifritz had made earlier that day, falsely claiming his family had been murdered at a house in Southeast Portland. In his testimony given to a Multnomah County grand jury, Britt said he tracked Elifritz down on SE Holgate Ave and tried to talk to him, but Elifritz said he didn't want to talk and flashed a knife. Britt said that's when he decided not to engage with Elifritz and instead forwarded his name to PPB's Behavioral Health Unit for a future check-in. At the time of writing, that check-in had not happened.

In a media release, PPB spokesperson Natasha Haunsperger says Britt and Livingston will be interviewed by PPB detectives later today. Both officers have been put on paid administrative leave until a grand jury decides whether the officers will be criminally charged for the shooting.

Two other police officers and "numerous community members" have been interviewed as witnesses. PPB says they also have a video of the incident.

The family atached this statement to their go-fund-me page.

On September 30th, 2018 my son's life was taken, three  Portland Police Officers shot and killed my son as he was running away.  He was shot more than 15 times in the back as well as his legs.  With my son's life being taken my life will never be the same.  My Grand children's life will forever be filled with pain from a void that can never be replaced.  My son's murder will be justified and the officers more than likely will not be reprimanded.  This pain has to stop! I wouldn't wish this reality on anyone.  The police hide behind their badge and pledge of service, feeling as though that gives then the right to kill, shooting my son 16 times in the back.  My son is not the first, and unfortunately god forbid not the last.  With all of the police shootings that force people to remind police as well as the world that black lives matter.  When it hit's home I can't even put into words. I don't know how to go on, I don't know how to begin to accept this.  It kills me my son did not threaten the life or welfare of any of the 3 officers but was still murdered as he ran away! What happen to getting arrested?  What wrong with due process, or the judicial system? As people get desensitized as if a life was not taken, as if my son didn't have kids.  As if my son didn't deserve to live.  There's nothing that can explain or be justified that my son is dead, or never coming back, never to hug me or tell me, " I love you".  Realities such as this make it hard to believe in justice.  All I can do is give to God and ask God why? At this time we don't have much to give, If anyone is able, or in a position to help with funeral cost, we do appreciate you, and thank you for your thoughts, concerns and prayers.

On Oct. 31, the grand jury cleared Sgt. Garry Britt and Officer Jeff Livingston of criminal prosecution in the shooting and killing of Patrick Kimmons Sept. 30. In November, transcripts of the proceeding were released.