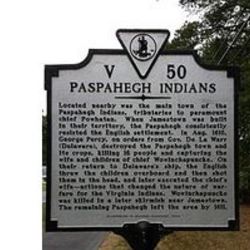 Timeline of interaction with colonists

Several colonists are boarded in Indian towns in the following truce, but relations remain strained, and the truce again falls apart when Smith tries unsuccessfully in the summer to establish further English fortifications in the territory of the Nansemond tribe (who lived downriver) and the Powhatan proper (who lived upriver around what is now Richmond, Virginia). Smith left Virginia in October 1609, but that same month the colonists did succeed in establishing an English fort (Fort Algernon) in the territory of the Kecoughtan tribe (near modern Hampton, Virginia).

The Paspahegh never recover from this attack, and abandon their town. This attack, and the offense of killing royal women and children, ignites the First Anglo-Powhatan War.

The original capital of the Paspahegh Indians, Sandy Point in Charles City County, Virginia, was settled by the English in 1617 as Smith's Hundred. After 1619, it was known as Southampton Hundred. St. Mary's Anglican Church was established there prior to the Powhatans' Uprising of 1622.