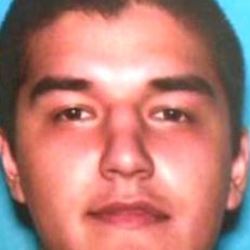 A man who attacked police with a baseball bat was shot and killed by officers responding to a domestic disturbance call Sunday evening, police said.

The name and age of the man was not released Sunday night.

About 6:15 p.m., officers responded to the 7000 block of Dublin Meadows Street and were met at the front door of the residence by a man holding a baseball bat.

One of the officers was immediately attacked by the man and the officer felt his "life was in immediate danger and fired several rounds" at the man, killing him, said Dublin police Lt. Herb Walters.

"My heart is just broken for the family," said Shari Vernor, who lives above the unit where the shooting happened and said violence is virtually unheard of in the Mediterranean-style Alamo Creek Meadows complex off Amador Valley Boulevard.

Bloodstains were still visible Monday on the front door and on the sidewalk at the home, where Herrera lived with his older sister and their mother, according to Vernor. She said she heard a woman on Sunday evening yelling, "Don't shoot him," followed by gunfire.

Herrera "has always been really friendly and says hi to me," she said.

The name of the officer who fired his weapon was withheld. He suffered non-life-threatening injuries and was placed on paid administrative leave pending investigations by police and the Alameda County district attorney's office.

The incident is the third fatal officer-involved shooting in the Bay Area in recent months in which police shot and killed people they said were armed with baseball bats.

Last month, Santa Clara police shot and killed a suicidal 53-year-old woman after she charged at them with an aluminum bat, police said. In February, Alameda County sheriff's deputies - who also patrol Dublin under contract - shot and killed a 61-year-old man in Castro Valley after he allegedly swung a bat at them.