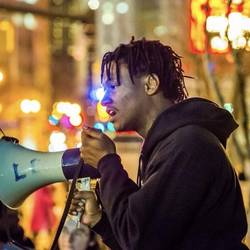 Oscar Cain, 31, reportedly led officers on a foot chase through a wooded area before brandishing a gun and being shot and killed by officers, according to Fox5Atlanta.

GBI spokeswoman Natalie Ammons gave preliminary details that the officer was responding to a possibly armed person, and that firearm was found on the scene.

“Cain did not comply with verbal commands and during the incident, Cain reportedly brandished a firearm,” Ammons said in a statement. “The officer discharged his weapon, fatally wounding Cain. A firearm was found at the scene.”

Individuals living near the wooded area where the shooting took place reported hearing the shots.

“I just heard three shots, the next thing you know, cops were in here,” said resident Jorge Flores. “The first shot, it was loud, it was really loud.”

The Atlanta Police Department incident report detailing the fatal shooting of community activist Oscar Cain gives very little details on his murder because the police officer’s body camera had been shut off.