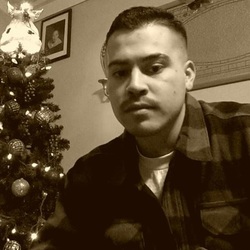 Omar Ventura was shot and killed on Christmas Eve by a Porterville police officer investigating a domestic violence call. Ventura was shot twice outside a home in the 200 block of North Larson Street Thursday afternoon after he reportedly brandished a knife while approaching his girlfriend and refusing an officer’s order to stop, said Porterville Police Lt. Dominic Barteau.

Police received a 911 call shortly after 4 p.m. from a woman reporting that Ventura, 23, had assaulted her and was acting “out of control,” Barteau said. Ventura, a Porterville resident, had left before officers arrived at the home, which belongs to his grandparents. A female officer was speaking with witnesses, including Ventura’s girlfriend — who had called the police — when Ventura returned to the house on foot, reportedly brandishing a knife. The officer pulled out her gun and ordered Ventura to stop, and she repeated the command, but he kept approaching the witness, police said. “The officer stopped him before he reached the victim” by shooting him.