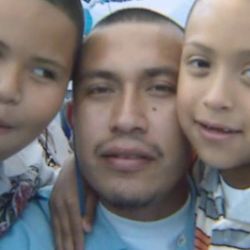 Omar Abrego, a 37-year-old father of three, was driving home on Aug. 2 when he was pulled over by officers right in front of his house in the 6900 block of South Main Street (map), according to family members. The confrontation with police took place just four blocks from where Ford was shot and killed by Los Angeles Police Department officers nine days later.

A witness who did not want to be identified said he saw officers strike Abrego’s face while he was down. Cellphone video from the scene appeared to show Abrego bleeding when he was on the ground. “I witnessed the officer, the sergeant for LAPD, strike the individual twice in the face with his fist. Then officers arrived on the scene,” the witness said. “I saw a lot of blood on the suspect’s face.” Another witness, who also wished to remain anonymous, added that police appeared to punch the man for about 10 minutes. The witness also told KTLA that officers beat Abrego with a baton.

Prosecutors announced Thursday, February 24, 2016 that they would not charge two Los Angeles police sergeants involved in the altercation that ended in Ambrego's death.

In a seven-page letter outlining the decision, the district attorney's office said it believed the two gang sergeants "used only the force necessary with the narrow purpose" of arresting Omar Abrego in August 2014.