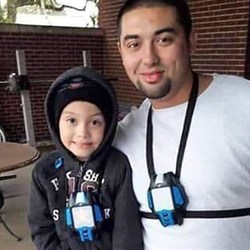 Nicolas Chavez, 27 was shot and killed by police while in a kneeling position.

The grieving father sat down on his patio, and hit play.

Police had reported that Nicolas, who had a history of mental illness and drug addiction, had been darting in and out of traffic and holding a sharp piece of rebar, possibly trying to kill himself. After officers arrived that night they said Nicolas, a father of three, repeatedly charged at them, and at one point, got hold of one of their stun guns.

"Fearing for their lives," the statement said, repeating a phrase used often by police to justify deadly force, "officers discharged their duty weapons."

Although these moments were captured on dozens of body cameras worn by officers who responded to the scene, those videos were not shared with the public.

Instead, Chavez, 51, was learning the gruesome details from the cellphone video, filmed by a resident from across the street and later posted to YouTube. It appeared to show something different than what police had described, Chavez said. He dropped out of his chair as he watched the 47-second clip. Then he got angry.

"It was an execution," he said.

The video shows his son on his knees, with several officers standing around him, guns drawn. Having already been shot at least once at that point, according to police, Nicolas appears to grab something near his chest, possibly the probe of one of the stun guns that officers had fired at him. Then, suddenly, a flurry of gunshots ring out.

The five officers who shot at Nicolas over the course of a 15-minute encounter with him remain on staff with the Houston Police Department pending the outcome of internal and external investigations.

Four months after the killing, four Houston police officers were fired in connection with the fatal officer-involved shooting of Nicolas Chavez.

In September 2020, police released bodycam video along with verbal explanation of officers' actions.