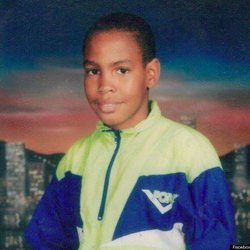 On Sept. 27, 1994, 13-year-old Nicholas Heyward Jr. was playing cops and robbers inside the stairwell of a Brooklyn apartment building. Officer Brian George mistook the boy’s toy gun for a real gun and shot him in the stomach, killing him. Then-Brooklyn District Attorney Charles Hynes, who is now facing a range of potential charges regarding his use of public funds, declined to press charges against George.

Brian George was never charged at any level. Nothing was presented to a grand jury. Brooklyn District Attorney Charles Hynes simply brushed the case off as a tragic accident. During a press conference after the shooting, Hynes showed the media a table of realistic toy guns to suggest that anyone could have confused the Heyward boy’s toy gun with a real one. However, the toy rifle that little Naquan had that night, which was perfectly legal and could be bought at any toy store in 1994, had bright orange coloring and was not shown by Hynes.

Recently, in a case eerily similar to the Heyward shooting, a judge recommended that charges be brought against the Cleveland police officer that shot and killed 12 year old Tamir Rice. While the local prosecutor brushed off the judge’s recommendation, preferring to go with the more secretive grand jury process that is now being challenged in California and New York, at least there was a level of scrutiny in the Rice case that the Heyward case never received over two decades ago.

February 2016 The outcome of the shooting death of Akai Gurley is driving 13-year-old Nicholas Heyward Jr.'s family to get their own case reopened.

In 1994, Heyward Jr. was playing in the stairwell of the Gowanus Housing Project, where he lived in Brooklyn, when a police officer shot and killed him.

Heyward was playing "cops and robbers" with friends and had a toy gun.

Heyward's family met with Brooklyn District Attorney Ken Thompson who agreed to look at the original evidence in Heyward's case.

Heyward Sr. said, "normally I don't have faith in our justice system but I do believe Thompson will do his job."

The year-long investigation into the shooting concluded that the shot was legally "justified."