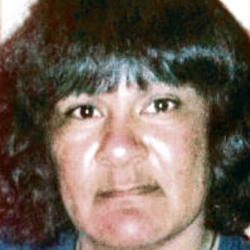 A sheriff’s deputy in New Mexico is accused of driving more than 114 miles per hour when she hit and killed a woman earlier this month.

New Mexico State Police are now recommending Eden Terrazas be charged with vehicular homicide in the death of Natividad Nunez.

“She shouldn’t have been going that fast and look at the consequences that happened now,” a Las Cruces resident said.

It’s a question residents want answered, why she was driving 114 miles an hour along this road.

“I don’t know they have a right to be driving over the speed limit,” the resident said.

According to New Mexico State Police, Terrazas was responding to an Amber Alert at the time of the crash.

Information from a criminal complaint shows Deputy Terrazas was driving 114 miles an hour, more than three times the speed limit.

“The determination of how fast is too fast is part of the investigation that’s being conducted by the state police,” Kelly Jameson, Dona Ana County Sheriff’s Office spokeswoman said.

The information compiled from her vehicle show Terrazas was driving at 63 miles per hour, in a little over 30 seconds Terrazas went from driving 63 miles a hours to 114 miles an hour.

That’s when police say Terrazas reached a curve in the road, veered off and hit Nunez.

“There are kids that are playing out there all the time,” the resident said.

Kelly Jameson with the sheriff’s office says deputies follow pursuit policies when responding to emergencies, but says this was not a pursuit situation.