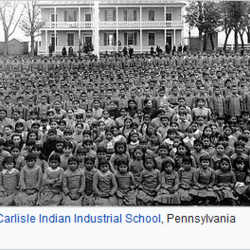 Native American boarding schools were established in the United States during the late 19th and early 20th centuries to educate and assimilate Native American children and youths according to Euro-American standards. These boarding schools were first established by Christian missionaries of various denominations, who often started schools on reservations and founded boarding schools to provide opportunities for children who did not have colonial schools nearby, especially in the lightly populated areas of the West. The government paid religious orders to provide education to Native American children on reservations. In the late 19th and early 20th centuries, the Bureau of Indian Affairs (BIA) founded additional boarding schools based on the assimilation model of the Carlisle Indian Industrial School off-reservation.

Children were typically immersed in European-American culture through appearance changes with haircuts, were forbidden to speak their native languages, and traditional names were replaced by new European-American names (to both "civilize" and "Christianize"). The experience of the schools was often harsh, especially for the younger children who were forcibly separated from their families. In numerous ways, they were encouraged or forced to abandon their Native American identities and cultures. Investigations of the later twentieth century have revealed many documented cases of sexual, manual, physical and mental abuse occurring at these schools.

Since those years, tribal nations have increasingly insisted on community-based schools and have also founded numerous tribal colleges and universities. Community schools have also been supported by the federal government through the BIA and legislation. The largest boarding schools have closed. By 2007, most of the schools had been closed down and the number of Native American children in boarding schools had declined to 9,500. In this same period, more Native Americans live in urban environments and having to accommodate to majority culture.

April 2018 Despite a personal appeal from Prime Minister Justin Trudeau, the Roman Catholic Church has said that Pope Francis will not apologize for its role in a Canadian system that forced generations of Indigenous children into boarding schools.