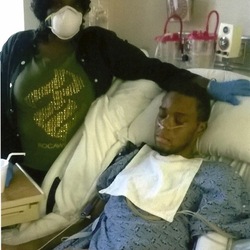 Nathan King was a father of three, a man in good health, proud of his African American and Native American heritage and strong family. He died in the Polk County Jail in July, 2015. He was 37 years old, healthy, and had tested negative for tuberculosis upon arrival. His death, however, was ruled a result of pulmonary tuberculosis.

Nathan had a long history of mental conditions such as bipolar disorder, and had been taking medication for years. Because of his disabilities, he was on SSI. When held in the Polk County Jail, he wasn’t given adequate healthcare, medication or seen by a mental health professional.

When he first arrived, he was tested for TB as all inmates are and was cleared. “Nathan was 6 feet tall and strapping, and he seemed ok," says his mother, Timmie King.

The jail did not let his mother or other family members know about developing medical problems, even though all of them live in Polk County.

A cousin went to visit him and Nathan sent a message: “Tell my Mom to come and see me.”

After that visit, one of her last with him, his mother feared for his life and she called the jail administrator and pleaded for medical attention for her son. Timmie’s brother, Don Glenn, said it was hard for her because she is timid and not used to talking with officials.

Less than a month later, Nathan was suddenly transported to a hospital from Polk County Jail; inexplicably he was transported by a squad car, not by EMS. Neither Timmie nor anyone else in the family were notified by Polk County Jail that he was off the unit and “in a deathly state” until three days after the fact.

When his mother and uncle reached the hospital, Nathan wasn’t conscious and a respirator was breathing for him.

“I remember the look on her face,” said Glenn. “There is this incredible amount of guilt and yet you can’t do anything. We trusted the people running that jail.”

Nathan never regained consciousness, and so he could not explain the many bruises found all over his body. That too has made it hard for his mother to reconcile herself to his death. When there are so many questions unanswered and no accountability, the grieving process seems to go on and on, she says.

His death certificate states that he died of pulmonary tuberculosis. Yet his TB test upon entrance to the jail was negative, and he had never displayed any symptoms prior to his arrest. This means that it is most likely that he contracted    tuberculosis in the jail.