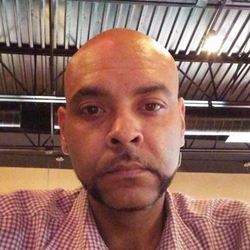 Tampa police are investigating an incident on Dale Mabry Highway that involved a naked man running around on the roadway jumping on cars. The man later died at a hospital.

Police say it started around 5:30 a.m. on Wednesday near Dale Mabry and Spruce Street. A naked man was behaving erratically, running on Dale Mabry Highway and jumping on cars. At one point, he banged his head on a car.

The man was identified by police as Nathan Hamilton, 39.

“The person was obviously high on some drug that would take 10 officers from the police department to take him down,” said John Deguenther who was staying at the Howard Johnson’s Hotel, just two doors down from where the disturbance began.

“When he yelled, you felt that somebody was going to get killed,” said Deguenther.

Police responded to the scene to subdue Hamilton, who appeared as though he was on “some kind of mind-altering drug,” according to Steve Hegarty with the Tampa Police Department.

Hamilton continued to fight the officers in the police car, where he suffered medical issues, Hegarty said. He was taken to the hospital, where he later died.

Police shut down Dale Mabry Highway while responding to the bizarre incident.

His family claims he was set up to be robbed.