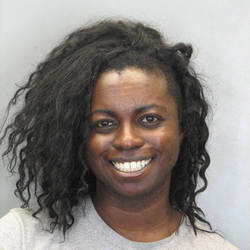 Natasha McKenna was diagnosed with mental illness at age 12, yet lead a productive life and had a child. She died a cruel and painful death in custody. Natasha McKenna, a 37-year-old Virginia woman, died five days after deputies shocked her four times with a stun gun while she was handcuffed. A statement released by the Fairfax County Sheriff's Department said that on January 26, Natasha McKenna was brought to the Fairfax County Adult Detention Center and charged with assault on law enforcement. Then, on Feb. 3, while she was being "prepared" for transfer to the Alexandria Adult Detention Center, she "physically resisted" deputies' commands and was stunned with a Taser, according to the release. She's shackled. And then tazered. Her last word were, "You promised you won't kill me". They tell her "We're your friends". Then yell, "Stop resisting" a few times. And then they kill her. Shortly afterwards, McKenna, experienced a "medical emergency." She was transferred to a hospital and put on life support. Five days later, she died.

On September 10, 2015, the Fairfax County Sheriff's office released that shows four to five officers restraining an unclothed Mckenna with Tasers drawn. The video shows McKenna was shocked four times. Forty minutes into the video, McKenna loses consciousness, and employees of the sheriff's office perform CPR. McKenna died five days later. ONLY ON FOX 5: The family of ‪#‎NatashaMcKenna‬ says they believe video of the mentally ill inmate's struggle with Fairfax Co. deputies was edited. McKenna's sister told Allison Seymour FOX 5 DC that she fainted when she saw the video. "I hit the dresser, knocked one of my tooth out. I was shocked," she said.

Richard Lichten, a use-of-force expert and former jail official in Los Angeles, weighed in, saying “She wasn’t a threat; she wasn’t going anywhere; she was restrained. It feels excessive, unnecessary and out of policy, based on what you’re telling me.”

Natasha death has been lied about and spun by police brutality apologists for months. Several sources explained to NBC that police detectives had been constantly denied access to the Fairfax County jail as part of their investigation into McKenna’s death.

To make matters worse, the police have yet to even explain why Natasha McKenna had been locked up in the first place.

Police quoted the autopsy report that said the cause of death was “excited delirium associated with physical restraint including use of conductive energy device, contributing: Schizophrenia and Bi-Polar Disorder.”

Yes, you read that correctly, officials said that McKenna died because she was deliriously excited. And the manner of death was listed as “Accident.”

But when you shock someone four times, it is clear that you mean to harm them, intentionally. But McKenna wasn’t just shocked. Both of her eyes were blackened one of her fingers was amputated or missing and there were several bruises running up the length of her arm.

McKenna was intentionally beaten, repeatedly, while she was handcuffed and shackled. Looking at the chair used to restrain her, it’s clear to me that she was tortured.

Outraged about Natasha McKenna? Fairfax County Sheriff Stacey Kincaid has some timely advice for you.

On September 8, 2015, McKenna's death was ruled an accident by Fairfax County, Va. authorities, according to NBC Washington.

On June 3, 2016, it was reported that the McKenna family had filed a wrongful-death lawsuit against the Fairfax County Sheriff’s Office. According to the complaint:

“It never crossed the minds of the SERT members that, rather than torture Ms. McKenna’s naked body with repeated 50,000 volt blasts of electricity, they might 1) leave the area and let the situation defuse; 2) sedate Ms. McKenna by shot or pill; or 3) call her family.”

The Fairfax branch of the NAACP organized a “Justice for Natasha McKenna” rally with about two dozen protesters gathering outside the Fairfax County Courthouse on Sunday, September 27, 2015 to call for changes in the county’s law enforcement and legal systems following the death of McKenna.