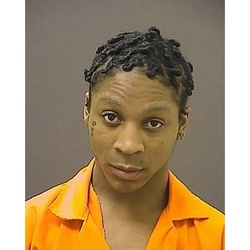 Federal authorities on Tuesday identified the driver killed while trying to ram a stolen SUV through a security checkpoint at the National Security Agency headquarters as a Baltimore resident with a criminal history for robbery and prostitution. The FBI named Mya Shawatza Hall, 27, as the driver who died. According to police, Hall and another person ended up at the gates of the huge spy agency Monday morning after stealing the vehicle from a 60-year-old man with whom they had traveled to a budget motel in nearby Elkridge.

On March 30, 27-year-old Mya Hall, a transgender woman on the streets since 2009, was killed when officers opened fire on her SUV causing the car to crash into a guard post at the National Security Agency’s Baltimore headquarters. Hall, with a history of robbery and prostitution, was out on a joy ride with a friend and was unarmed.

While the deaths of black men like Mike Brown, Eric Garner, and Freddie Gray have outraged people on social media platforms and on streets, little or no attention has been given to Hall’s death. She and her friend have been written off as troubled. Hall’s name is missing from Reddit, an online platform usually supportive of transgender victims of violence and black victims of police brutality.

While protests like those in Baltimore remind us that #BlackLivesMatter, the lives of fallen black women tend to matter less when it comes to summoning public outrage over their deaths. “When black men are killed, slogans like “hands up, don’t shoot” or “I can’t breathe” echo across the country. When black girls and women like Boyd are killed, there is comparative silence,” writes Darnell Moore.

However, as protests over the death of Baltimore resident Freddie Gray have burned the city and the world, people are urging on Twitter to remember her name as well and get her justice too. A post on Tumblr simply proclaiming Hall’s name has gotten 14,000 notes in under a day.

The overnight tryst began in Baltimore, with three men, two dressed as women. It continued at a motel on U.S. 1, and when one of the men woke up Monday morning, his two cross-dressing companions, and his Ford Escape, were gone.

So too wrote the New York Times:

FORT MEADE, Md. — Two men dressed as women smashed a stolen car into a police vehicle after they disobeyed commands at the closely guarded gates of the National Security Agency on Monday, prompting police to open fire.

Or this piece on Tuesday when the legal name of the victim was released, written by CNN and republished by a variety of outlets:

The FBI publicly identified Tuesday the man who died Monday while trying to use an unauthorized vehicle tried to gain access to the National Security Agency campus in Fort Meade, Maryland, as Ricky Shawatza Hall.

Why did the press so forcefully assert and repeat the “men dressed as women” meme? The obvious answer seems to be transphobia, but it’s, as ever, more complicated. The misgendering speaks to the very fears that saw Mya and her companion in the SUV shot at in the first place. We are so inured to fanciful stories about terrorist activity that we’ll believe the staggeringly unlikely — that a group of terrorists dressed up in women’s clothes to crash into an NSA car as some sort of big plot — before accepting a more mundane, far less threatening truth: that someone in distress made a wrong turn, lost their bearings, and panicked when police surrounded them. According to new AP reports that interview those who knew Mya, she was struggling with her mental health and was unable to afford treatment.