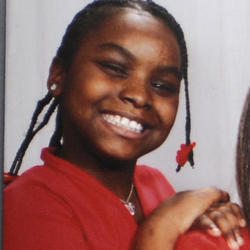 Monae Turnage was 13 years old when she was killed on 3/4/2012 in Baltimore Maryland. Two of her friends, ages 13 and 14, accidentally shot and killed Turnage. The weapon used was found in the trunk of an off-duty police officer who was in a relationship with a relative of one of the shooters. The officer was suspected of helping to cover up the shooting, which may have contributed to Turnage’s death. The youths were charged with involuntary manslaughter. The officer was charged with obstruction of justice, but exonerated in October for lack of evidence. The family is filing a civil suit against him.