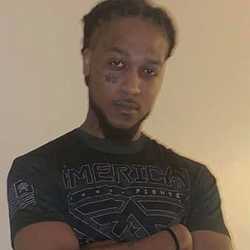 Miles Jackson was killed by officers conducting a routine pat-down of him in a hospital emergency room who found a gun in his waistband, spurring a struggle over the weapon and a standoff that ended in officers killing him, according to police body-camera footage released on Wednesday.

Officers had been searching Jackson, a black man, at the hospital on Monday in preparation for a custody exchange over warrants he had out for his arrest. Jackson began to struggle with the two officers after one of them felt the gun, video showed.

One of the officers used a stun gun on Jackson after they fell to the floor, while the other attempted to pull Jackson’s hands away from his waistband. A shot can then be heard in the video, apparently from the gun in Jackson’s waistband.

The officer who stunned Jackson took cover outside the room. The other officer appeared to return fire at Jackson once before taking cover behind a hospital bed, video showed.

Officers shouted for minutes at Jackson, 27, to raise his hands and put them on his head. An officer eventually used a stun gun for a second time on Jackson, who was on his side on the hospital room floor. Another shot can be heard in the video before officers opened fire.

Jackson had apparently been brought to the hospital earlier that day, walked away, and then was found in a nearby bank parking lot. Before Jackson was taken back to the hospital, a Westerville officer patted him down briefly, according to footage from the officer’s body-cam video.

“I’m just going to pat you down real quick, make sure you ain’t got nothing on you, right, no weapons, nothing like that?” the officer said. Jackson repeatedly asked for a cigarette, saying he had anxiety.

Columbus police were called to the hospital because Jackson had outstanding warrants in the city.

Once Jackson was in a room in the hospital’s emergency room, an officer briefly handcuffed his left hand to the hospital bed. A few minutes later, an officer removed the handcuff and began collecting Jackson’s property.

“You don’t have nothing sharp in your pockets, do you?” the officer asked. “Hopefully somebody would have caught that earlier.” About a minute later, a bullet dropped from Jackson’s pants.

“Uh oh. Got a little bullet action,” the officer said calmly as he picked it up. “Don’t see people carrying those around every day.”

Over about three minutes, officers outside the room shouted dozens of commands at Jackson, lying on the floor, to put his right hand over his head with his left hand. One Columbus officer was still in the room, behind the bed, with his gun pointed in Jackson’s direction, video showed.

“Slowly put your right hand up in the air. Slowly,” she said. When Jackson said he was putting the gun down, the officer replied, “Do not touch the gun. Let go of the gun and put both of your hands up over your head.”

The second use of the stun gun, the shot and then the police shooting erupted within seconds after her orders, the video showed.

On Wednesday, Westerville’s police chief placed the two officers who initially came into contact with Jackson on administrative leave. He told residents “that if policy violations are found, there will be an appropriate level of accountability”.