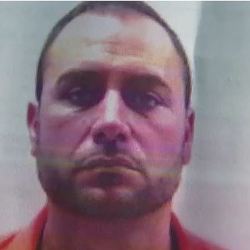 A chase for an inmate who escaped from authorities and then killed someone during a carjacking, ended in a shooting in San Benito, authorities said. The inmate later died.

Officials say Garcia attacked the detention officer, slashing his face, taking his gun belt and assault rifle. Police say Garcia swam across a nearby resaca and forced his way into a home on Fruitdale Road demanding keys to a car.

“Apparently he was able to escape and he took off to a local residence here and optimally shot and killed the residence owner, took his vehicle, and he was found somewhere on the expressway where a pursuit ensued and ended up in San Benito," Trevino said.

The shooting victim has been identified as 56-year-old Mario Martinez.

The chase ended in the industrial park at Williams Road and the frontage road, when the suspect drove into the parking lot of the Gulf Coast Sign Company.

Witnesses near the Gillman Chevrolet car dealership in San Benito said they heard a quick succession of gunshots. One bystander described the scene as a “concert of lights.”

Brownsville Police Chief Orlando Rodriguez also was on site. He said Brownsville PD was part of a multi-agency operation that was coordinated by the Cameron County Sheriff’s Department.

Lt. Johnny Hernandez, the communications officer for the Texas Department of Public Safety, said it assisted in the operation with the Texas Rangers.