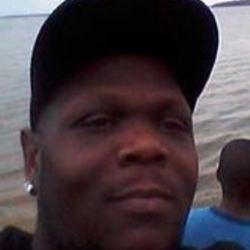 Michael Sabbie ― a 35-year-old stay-at-home father of four ― said it after five guards piled on top of him inside the Bi State Jail, a facility that sits directly on the border between Texas and Arkansas and is run by a for-profit company.

“I can’t breathe.” Sabbie ― who packed his kids’ lunches, drove them to and from school, and carted them around to their after-school activities ― said it again after a sixth officer pepper-sprayed him as he lay on the concrete floor.
“I can’t breathe, sir. Please! Please!” Sabbie ― who wrote a Facebook post thanking God for his kids just hours before his arrest ― said it again as guards held him up against a wall outside of the nurse’s station.
“I can’t breathe,” Sabbie said again after he was forced into the shower. “I can’t breathe,” Sabbie repeated, echoing the final words of another black father, 43-year-old Eric Garner, who died in New York in July 2014 as the result of an officer’s illegal chokehold.

A guard threatened to pepper-spray Sabbie again. “I’m sorry,” Sabbie said, hoping to avoid being hit with painful chemical agent a second time. “I’m sorry. I’m sorry.” Then Sabbie collapsed. The guards, paid a starting rate of $10 an hour, apparently thought he was faking it. They took him to a cell.

“Can’t breathe,” Sabbie said as guards removed his handcuffs and left him on the floor of the cell overnight. Sabbie, who at that point had been in custody for roughly 48 hours, was dead by the morning.

A remarkable 169-page order issued by U.S. Magistrate Judge Caroline Craven on Wednesday, March 6, 2019 laid out the extensive evidence of neglect and mismanagement of the Bi-State Jail, which is run by the for-profit company LaSalle Corrections.

On April 19, 2019, the AP reports that an undisclosed settlement was reached yesterday in a federal lawsuit over the death of a man in a for-profit jail in Texarkana.