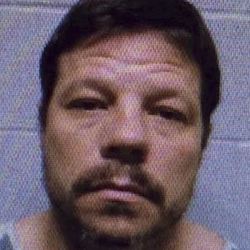 Fugitive Michael Vance, wanted in the shootings of two Oklahoma police officers and in connection with the deaths of two relatives, was killed in a shootout that injured the Dewey County sheriff Sunday night.

Vance was killed by an Oklahoma Highway Patrol trooper after being found near the western Oklahoma town of Hammon on Sunday, said Dave Turk, a spokesman for the U.S. Marshals Service.

Confirmation of the end of the search also came via Twitter from the OHP's top official.

The Dewey County sheriff, driving south on Oklahoma 34 from Leedy, spotted a flatbed truck dragging a chain behind it creating sparks, the Oklahoma State Bureau of Investigation said Monday.

The sheriff made a traffic stop to warn the driver a fire could start due to those sparks. The driver of the truck stopped and exited the vehicle shooting an assault rifle. The sheriff was shot in the shoulder and arm as he returned fire, the OSBI said.

Dewey County office deputy Judy Junkins said Sheriff Clay Sander underwent surgery Monday after he was shot in the arm, but that his injuries are not life threatening.

The driver got back inside the truck and drove south on Oklahoma 34. Within 30 minutes, law enforcement engaged the suspect, a gun battle ensued and Vance was shot and killed, the OSBI said.

Before the shootings, officers set up a search area near Hammon after officials received a report of a suspicious vehicle that may have been used by Vance, who was wanted for multiple shootings in Oklahoma on Oct. 23.

Authorities said a tip from a farmer led them to a spot near the small western Oklahoma community of Hammon, where they believe Vance had been camping.

Vance was shot and killed by the trooper after being pulled over around 9 p.m., Turk said.

The Oklahoman reported Sander was being treated at a hospital in Elk City after being shot in the arm and shoulder.