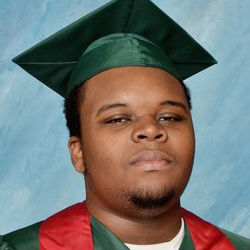 The shooting of Michael Brown occurred on August 9, 2014, in Ferguson, Missouri, a suburb of St. Louis. Brown, an 18-year-old black man, was fatally shot by Darren Wilson, 28, a white Ferguson police officer. The disputed circumstances of the shooting and the resultant protests and civil unrest received considerable attention in the U.S. and abroad, and sparked a vigorous debate about law enforcement's relationship with African-Americans, and police use of force doctrine in Missouri and nationwide, overall.

PBS has released a special called Ferguson Rises that focuses on Michaeb Brown Sr.'s trials and tribulations around his son's death.

A member of the grand jury that declined to indict a white Ferguson police officer in the shooting death of Michael Brown is challenging a federal judge’s dismissal of her lawsuit that sought to allow her to speak publicly about those secret proceedings.

A federal judge in St. Louis has scheduled an October 2016 trial in the case of Michael Brown Sr. and Lesley McSpadden against the city of Ferguson, its former police chief and Darren Wilson.

On June 6, 2016, a federal judge ordered the release of unredacted transcripts of grand jury proceedings in the case to the Brown family, marking the first time someone other than a prosecutor or grand juror will see uncensored details of the secret proceedings.

The City of Ferguson is asking for a release of Michael Brown's juvnenile records. This request has been made & denied in the past, and the city seeks to use them to villainize a child in the wrongful death suit.

In January 2017, a federal judge ordered Michael Brown's parents to turn over his education records and certain medical documents as part of their wrongful-death lawsuit over the 2014 police shooting in Ferguson, Missouri.

On June 20, 2016, the Eighth Circuit Court of Appeals revived claims from a woman who served on the Michael Brown grand jury who wanted to speak out to correct the implication that the jury unanimously decided not to indict Darren Wilson.

On Thursday, July 30, 2020, St. Louis County Prosecutor Wesley Bell said that he will not charge the former Ferguson police officer who shot and killed 18-year-old Michael Brown in 2014.

A grand juror who wanted to speak out about the investigation into the fatal shooting of Michael Brown in 2014 has been thwarted again, this time by a federal appeals court on Friday, August 14. 2020 when a three-judge panel of the 8th U.S. Court of Appeals upheld a lower court ruling tossing out the lawsuit filed by “Grand Juror Doe.” Friday’s decision said the state law forbidding jurors from talking about their experiences “is narrowly tailored to serve Missouri’s compelling interest in preserving the functioning of its grand jury system.”

Demonstrators conducted a series of protest events in Ferguson over the weekend to commemorate the one year anniversary of the shooting of Michael Brown. 18 year-old Tyrone Harris was critically injured in an exchange of gunfire with police near the protests and a state of emergency was declared. Non-government white militia group was also present, brandishing assault rifles during the protests, with apparent assent from Ferguson police

In a surprise move, just before the statute of limitations was about to expire, St. Louis County Counselor Peter Krane filed charges last week against at least 100 people who were arrested a year ago peacefully protesting the murder of Michael Brown outside of the Ferguson Police Department.

It was reported on August 24, 2015 that Municipal Court Judge Donald McCullin, appointed in June, ordered that all arrest warrants issued in the city before Dec. 31, 2014 be withdrawn.

A report on September 3, 2015 indicated that police actions following the shooting made the aftermath worse.

It was reported on September 11, 2015 that a December sentencing hearing was set for thirty-three-year-old Justin Payne who admitted in federal court that he helped orchestrate a cyberattack that disabled a police union's website during the unrest following the shooting death of Michael Brown. Federal prosecutors say last December's cyberattack that targeted the St. Louis County Police Association website was part of a so-called "Operation Ferguson" effort in support of protesters of Brown's August 2014 shooting death by a Ferguson police officer. Investigators say Payne used Twitter accounts to orchestrate the cyberattack that overwhelmed the police union's website.

A panel of activists, researchers, community members, and other volunteers on Monday, September 14, 2015, unveiled a new report with 189 "calls to action" to address the scourge of racial inequity in and around St. Louis, Missouri, illuminated by a year of protests following the police shooting death of unarmed black teenager Michael Brown last August.

In September 2015, the release of a documentary entitled was announced.

Colorlines released an article on life five years after Michael Brown was killed.