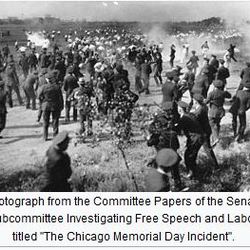 The incident arose after U.S. Steel signed a union contract but smaller steel manufacturers (called 'Little Steel'), including Republic Steel, refused to do so. In protest, the Steel Workers Organizing Committee (SWOC) of the Congress of Industrial Organizations (CIO) called a strike.

On Memorial Day, hundreds of sympathizers gathered at Sam's Place, headquarters of the SWOC. As the crowd marched across the prairie towards the Republic Steel mill, a line of Chicago policemen blocked their path. The foremost protestors argued their right to continue. The police, feeling threatened, fired on the crowd. As the crowd fled, police bullets killed ten people and injured 30. Nine people were permanently disabled and another 28 had serious head injuries from police clubbing.

Years later, one of the protesters, Mollie West, recalled a policeman yelling to her that day, "Get off the field or I'll put a bullet in your back." No policemen were ever prosecuted.

A Coroner's Jury declared the killings to be "justifiable homicide". The press often called it a labor or red riot. President Roosevelt responded to a union plea, "The majority of people are saying just one thing, ′A plague on both your houses′"

Today, on the site of Sam's Place stands the union hall of the United Steelworkers and a memorial to the 10 people who died in 1937.

In the book Selected Writings by Dorothy Day (who was present), the events of the protest are summarized as thus: 'On Memorial Day, May 30, 1937, police opened fire on a parade of striking steel workers and their families at the gate of the Republic Steel Company, in South Chicago. Fifty people were shot, of whom 10 later died; 100 others were beaten with clubs.'

In the wake of the massacre, the news reel of the event was suppressed for fear of creating, in the words of an official at Paramount News agency, "mass hysteria."