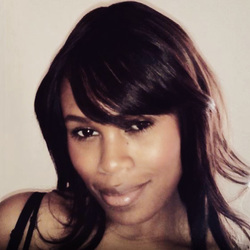 Police Chief Jeri Williams said a man called 911 requesting police officers to respond to a domestic dispute he was having with Hockaday. "Domestic violence is one of the most challenging calls we go on. Quite frankly, in the city of Oxnard, we average 2,500 domestic violence calls a year," Williams said. The first officer on scene, Officer Roger Garcia, heard screams coming from the apartment. Williams said the officer made contact with the man near the front door and within seconds Hockaday came at them with a knife. "The shooting took place in less 20 seconds from the time of the initial incident when the first officer initially made contact," Williams said. "In the course of 20 seconds-- I don't know the details of what was going on in the officer's mind. I do know this, that our officer was definitely looking out to protect himself and other parties involved in this scenario," Williams said. Hockaday was dead at the scene. A knife was recovered near her body.

Officer Garcia had also previously used his alleged training as a Crisis Intervention Specialist (CIS) in the February 5, 2014 shooting of Rosa “Chita” Guillen at Oxnard’s Del Sol Park. Guillen was also in a distressed state, and according to her she called a suicide crisis hotline for help due to depression following her mother’s death. A Colonia resident, she informed the dispatcher that she was carrying small toy guns (a means to potentially intimidate street harassers while “on a budget”). When officers responded to the call she was fired upon, from a distance, 36 times. According to Guillen, Officer Garcia was the first to initiate fire. Guillen miraculously survived and is now disabled.

Three children witnessed the shooting and are with family, following a Child Protective Services evaluation. Officer Garcia is on paid administrative leave. The Ventura County District Attorney is providing assistance in the investigation.  Her older sister Misha Charlton speaks out here.