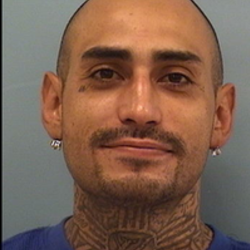 New Mexico State Police say 30-year-old Marvin Maestas of Mora, was killed during an exchange of gunfire involving officers near Cerrillos Road in Santa Fe early Tuesday morning, August 25, 2015. According to State Police Chief Pete Kassetas, a Sandoval County deputy clocked a pickup truck driving 90 mph on I-25 at mile post 237 around 1:30 a.m. The deputy attempted to stop Maestas, but Kassetas said Maestas continued speeding at more than 100 mph on I-25 northbound. The chief said Santa Fe police got involved in the chase when the vehicle entered Santa Fe County. Officers deployed stop sticks, which resulted in the truck coming to a stop on Cerrillos Road. According to Kassetas, Maestas got out of the vehicle and began to run from officers. A foot pursuit ensued involving Santa Fe police, state police, the Sandoval Co. Sheriff's Department and the Santa Fe County Sheriff's Office. State police say that Maestas pulled out a gun during the pursuit and exchanged gunfire with officers. Maestas was hit by the gunfire and pronounced dead at the scene near Old Dinosaur Trail and Cerrillos Road.

The Albuquerque Journal reported on September 11, 2015 that some of the officers involved have hired lawyers and their counsel has advised them not to give any statements.

An autopsy report released November 30, 2015 says a 30-year-old Mora man died from four gunshot wounds to the back

November 2015 Autopsy Report - four shots in the back