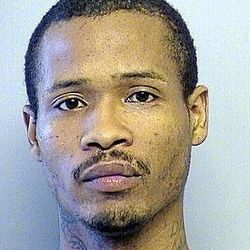 A Tulsa Police officer shot and killed a man at the Fairmont Terrace apartments at 61st and Peoria Wednesday afternoon. The man has been identified as 31-year-old Marvin Dion Alexander.

A search of Oklahoma Department of Corrections website shows that Alexander has a lengthy record dating back to 1998. He has served time for drug, burglary and weapons charges.

The shooting was reported at about 3:20 p.m.

Tulsa Police spokesman Officer Leland Ashley told News On 6 a U.S. Marshall was attempting to question Alexander when he took off running.

The marshall and two members of the Tulsa Police Department's gang unit gave chase.  According to Ashley the man ran through a breezeway at the apartment complex, and when an officer came around the corner, the officer saw that the man was reaching for a gun so the officer opened fire.

"The officer started yelling for the other officer who was coming around the corner and said, 'he's going for something, he's got something' and in fact he did have a weapon," said Leland Ashley of the Tulsa Police Department.

The officer fired multiple shots at the man who died at the scene, according to Ashley.  Police say he did have a handgun.

Ashley said it's not clear how many bullets struck the man.

Ashley would not release the names of the law enforcement officers involved.  He said it's department policy that officers are suspended with pay after a shooting incident.

Neighbors immediately poured onto the street near 61st and Peoria after shots shattered the south Tulsa sky. People who live near the scene say they don't trust the police.