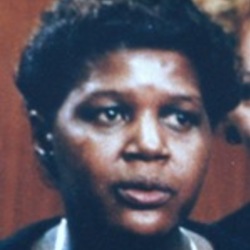 Officer Melissa Schmidt, a Marine veteran and a native of Bloomer, Wis., was wounded in the abdomen, just below her bulletproof vest. She died four hours later at Hennepin County Medical Center with her family at her side. The woman involved in the incident, Martha Donald, 60, also died at the hospital.

"One of ours has died and I ask our citizens for their prayers, for Melissa's family and prayers for these men and women who do such good work for you," Olson said.

Martha Donald's son, Terrance Jones, says he can't understand what led to the shooting. He says his mother, a native of Little Rock, Ark., had lived and worked in Chicago for years. He said she moved to the Twin Cities a few years ago after her husband died and money became tight.

"She never really had any kind of mental disabilities or complications. She never had drug issues, where she was on drugs or anything like that," he said.

Jones also said he didn't believe his mother was on any kind of mind-altering medication.

"The only medication I'm aware my mom was taking was a blood pressure pill."

Later, Jones told the Associated Press he learned that his mother owned a gun. He says she was the victim of a beating at her job in Chicago.

"My mom isn't the kind of person that would take a gun and pull it on any kind of human being. I mean, that's just not her," he said.

"She loved doing things with people, and that's part of why it's so hard for me to believe, and understand what has transpired," Jones said.