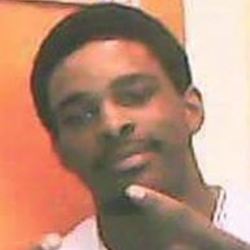 In 2012, 19-year-old Tevin Louis and his best friend Marquise Sampson allegedly robbed a restaurant. After reportedly making off with about $1,200, the two ran in different directions. Sampson crossed paths with an officer, who gave chase and ultimately opened fire, killing the teenager. Louis arrived at the scene where his friend was shot, and attempted to cross the police line. He was arrested for disorderly conduct. But in a shocking turn, Louis was eventually charged with first-degree murder in the death of his best friend, even though it was the officer who killed Sampson. Louis was found guilty. He is now serving a 32-year sentence for armed robbery and a 20-year sentence for murder. Louis is one of 10 people with similar cases exposed in the Chicago Reader's new article headlined "Charged with Murder, But They Didn't Kill Anyone -- Police Did."

Bizarrely, Dicarlo acknowledged killing Sampson in his account of that night’s events, and his admission of the shooting has been preserved in Chicago Police Department records and in his interview with the Chicago Independent Police Review Authority (IPRA), which investigates all officer-involved shootings in the city. Dicarlo told the IPRA that Sampson pointed a weapon in his direction, prompting Dicarlo to fire his service weapon.

However, Sarah Macareg, who co-wrote the Reader article with Allison Flowers, obtained the video of Sampson’s killing through a Freedom of Information Act request. Macareg told Democracy Now that Dicarlo’s account is highly suspect, given his controversial record as a Chicago police officer.

“The video is highly obscured. There is no situation in which it’s clear that Marquise Sampson ever pulled his weapon on Dicarlo,” Macareg said. “The officer has more than 20 misconduct complaints on his record, one of which involves the improper use of a weapon. And really, the whole finding of the shooting being justified was very much reliant on just the officer’s account.”