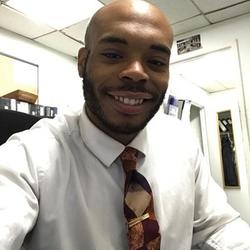 On Monday, May 14, science teacher Marcus-David L. Peters was fatally shot by police on Interstate 95 in Richmond, Virginia. Reportedly, Peters was being pursued by cops after a hit-and-run. Police claimed he hit two more vehicles after the initial accident and then drove off the road.

WTVR.com reports, “Peters emerged from his disabled vehicle and ran into the northbound lanes of I-95. He was not wearing any clothes. Peters then ran back towards the on-ramp and charged the RPD officer, who deployed his Taser in an effort to disable Peters. It proved ineffective, so the officer fired his service weapon, striking Peters, who was unarmed.” Peters died shortly after midnight on May 15. He was only 24 years old.

August 2018 Richmond Police officer Michael Nyantakyi was justified when he shot and killed Marcus Peters alongside Interstate 95 in Richmond, a Use of Force investigation conducted by Richmond Commonwealth's Attorney Michael Herring determined.

May 2018 Public meeting to protest murder of Marcus-David Peters