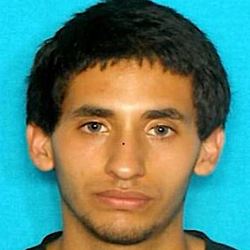 Police shot and killed 27-year-old Marco Antonio Sigala Jr. Monday after exchanging gunfire with him inside the Walmart just after 3 p.m. Sigala’s identity was withheld pending notification of his next of kin.

No one else was injured in the incident.

Speaking during a news conference after the shooting, Weslaco Police Chief Joel Rivera said more than 20 police officers and Hidalgo County deputy constables responded to the store within two minutes of receiving a call that a man dressed entirely in black and armed with an assault rifle had entered the store.

“We believe that the suspect entered the Walmart through the north side entrance, had a confrontation with a customer, ended up pointing a gun at the customer. That’s still being corroborated through video and eyewitnesses,” Rivera said.

Officers ordered Sigala to lower the weapon, which he did, Rivera said. They later attempted to subdue him via a beanbag round, Rivera said during a phone interview Monday night.

The less-than-lethal round proved ineffective, he said.

As the situation continued, Sigala allegedly refused to show officers his hands before producing a handgun and opening fire on officers. Police returned fire, killing the man.