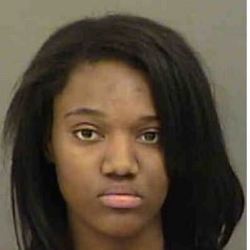 A teen was charged in a fatal crash following a police chase that ended in north Charlotte late Wednesday night.

Sabrina Burdea, 18, has been charged in the crash that killed 18-year-old Marcia Lawton.

Charlotte-Mecklenburg police received a call about a stolen 2008 Ford Fusion traveling on Sugar Creek Road near Reagan Drive. The Ford was stolen from Nations Ford Road around 11:07 p.m.

Officers located the Ford on North Tryon Street near West Craighead Street and attempted to stop the driver, identified as Burdea, after the helicopter unit was in the area. Burdea, traveling on Atando Avenue, refused to stop and accelerated onto Interstate 77, police say.

The Ford reportedly exited onto I-85 south, lost control, ran off the road, struck several trees and rolled down an embankment. It happened around 11:41 p.m., closing the I-85 ramp for a time.

Lawton, the front seat passenger, was pronounced dead on scene.

Burdea and the rear passenger, a 15-year-old, went to Carolinas Medical Center with serious injuries.

Burdea faces charges of involuntary manslaughter, possession of a stolen vehicle, felony fleeing to elude and reckless driving. She will be transported to the Mecklenburg County Sheriff's Office after being released from the hospital.

Lawton's family has been notified of her death.

Police say excessive speed contributed to the crash and no impairment is suspected.

The crash remains under investigation.