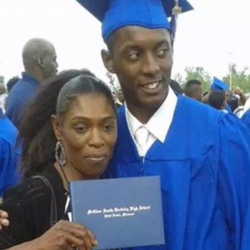 Mansur Ball-Bey,18 was killed on the morning of August 19, 2015 while St. Louis police officers executed a search warrant. When police approached the home, two suspects were seen running out of the back armed with guns. Officers ordered the suspects to drop their weapons, at which time one of the suspects, Mansur Ball-Bey, stopped and pointed a gun at police, authorities said. The two officers then fired a total of four gunshots towards Mansur Ball-Bey, according to police.

Reported on August 21, 2015, the results of the autopsy show Ball-Bey was struck in the upper right part of his back by a bullet that hit his heart and an artery next to the heart, said St. Louis Chief Medical Examiner Michael Graham.

On June 2, 2016, the St. Louis Circuit Attorney said her office would not file charges against the officers involved in the shooting death of 18-year-old Mansur Ball-Bey.