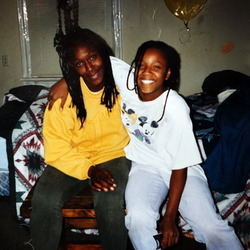 Timothy Russell and Malissa Williams were in a car together. Both were homeless and had met at a shelter where they were receiving free meals. People who knew them told investigators they were most likely out looking to buy drugs. A plainclothes police officer spotted Russell's 1979 light blue Chevy Malibu by an area known as "the wall" on Lakeside Avenue known for drug deals. Shortly before 10:30 p.m. the officer called in the car's license plate. The plates came back clean, but the officer tried to pull Russell over for a turn signal violation. Russell instead sped away, and the police officer was unable to catch up. The chase ended when Russell turned into Heritage Middle School in East Cleveland. Police cars surrounded the Malibu. Several police officers reported seeing a gun in the car, and believed that Russell was trying to run them over. One officer began to shoot, and others opened fire. Many officers believed the suspects were firing out of the vehicle, but later investigations found no evidence of a weapon in the car. In the end, 13 police officers shot 137 bullets at Russell and Williams. Russell was hit 23 times, and Williams was hit 24 times. Both were declared dead by 11:24 p.m.

Sgt. Brian Chetnik, one of the officers involved in the chase was promoted to lieutenant by Mayor Frank Jackson in May 2016. Chetnik was among four supervisors whose suspensions were overturned by an arbitrator.

Cleveland police Officer Michael Brelo has been found not guilty in the shooting deaths of two unarmed suspects in a 137-shot barrage of police gunfire after a high-speed chase. The judge's verdict Saturday, May 23, 2015 for Brelo comes after a four-week trial on two counts of voluntary manslaughter in the deaths of Timothy Russell and Malissa Williams on Nov. 29, 2012.

Ultimately, the families of Malissa Williams and Timothy Russell settled with the City of Cleveland for $1.5 million each.

A local TV news channel has learned the city of Cleveland will finally determine what internal punishments will be issued to the 13 police officers involved.

The news station confirmed papers have started going out to the officers outlining administrative charges.

On October 7, 2015, Ohio’s Eighth District Court of Appeals affirmed a lower court decision to reinstate a Cleveland police sergeant who was fired after the November 2012 police chase and shooting that killed two unarmed people.

On January 26, it was reported that six of the officers involved in the deadly event, including Brelo, were fired.

In September 2016, a second court rejected a lawsuit by nine Cleveland police officers that claims that the city and former police Chief Michael McGrath discriminated against them by keeping them on restricted duty after the 2012 police chase that resulted in the deaths of Malissa Williams and Timothy Russell.