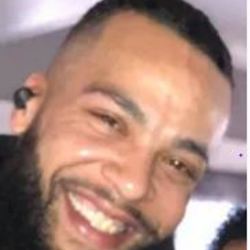 According to police, Luke Anthony Swann opened fire on three city police officers before they shot and killed him early Monday.

The confrontation followed a vehicle theft and shooting that injured one person.

Shortly before 4 a.m. Monday, officers responded to a shooting near East 25th Street and Logan Avenue on the city's east side, police said. The victim told officers that two men stole his sport utility vehicle and that one of the men shot him in the leg.

Less than 10 minutes later, officers found the stolen vehicle near Southeast 14th Street and Pioneer Road. Officers followed it until it parked in a driveway in the 800 block of East Kirkwood Avenue in the city's Indianola Hills neighborhood on the south side, a dead-end street, police said.

The three people in the stolen vehicle fled on foot as officers approached, Parizek said. A man and a woman were taken into custody, but a man later identified as Luke Swann, 36, went out of sight, Parizek said.

Swann fired multiple gunshots toward the officers, police said. Buck, Minnehan and Steinkamp all returned fire; Swann was hit and died at the scene, authorities said.