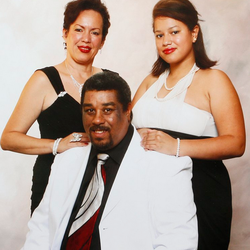 Luis Rodriguez stopped breathing and later died at a hospital after he was taken into police custody following a domestic dispute at the Warren Theater in Moore.

It was supposed to be a fun family outing to the movies, but Nair Rodriguez's 19-year-old daughter got under her skin. They fought, she said, and she slapped her daughter. Moments later, police arrived on a domestic dispute call at the Moore, Oklahoma, theater and did not confront Nair Rodriguez but rather her husband, Luis. They took him down, and after the encounter on February 15, he was dead.

Cell phone video taken by Nair Rodriguez and released this week shows the final minutes of the takedown. Nair Rodriguez accuses officers of brutality. Police say they were following protocol and used no undue force, although three officers were suspended with pay.

Prior to police arriving, the mother-daughter spat upset the mother so badly that she bolted for the family car. Her husband, Luis, followed her to calm her down, family attorney Michael Brooks-Jimenez told reporters. That's when a group of police and theater security officers turned up, he said. There were three of them -- one working off-duty security at the theater and two active-duty officers already there to deal with two drunk patrons who'd passed out -- according to Moore police spokesman Sgt. Jeremy Lewis. (In addition, two Oklahoma state game wardens were working as off-duty security at the theater, state wildlife department spokesman Micah Holmes said.)

As the two on-duty Moore officers were leaving, a person ran into the lobby and told them about some kind of domestic dispute outside, Lewis said.

What happened next is disputed. Nair Rodriguez has said officers beat Luis Rodriguez, CNN affiliate KFOR reported. But Moore Police Chief Jerry Stillings calls the actions of his officers "reasonable." He would not go into much detail and said an investigation was under way. He mentioned that police used pepper spray, CNN affiliate KOCO reported.

Luis Rodriguez ended up on the ground with five men pinning him down, and Nair Rodriguez pulled out a cell phone. Her fearful cries fill the recording. "Luis! Luis!" she calls out frantically. Her husband does not respond and does not appear to move. She calls to the officers to assure her that he is alright.

The officer said police received a call about domestic violence before confronting her husband. On the video, Nair Rodriguez tells police, "It wasn't him.  I hit my daughter." She asks to know why they have pinned down her husband. "He refused to give his ID," the officer said. "He got combative."  An ambulance can be seen in the background, and Luis Rodriguez is lifted onto a stretcher. The video ends shortly afterward.

February 2015 One year on vigil