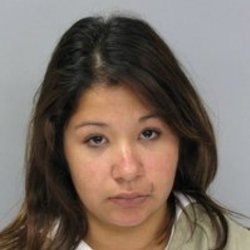 On 09/23/11 at approximately 0251 am, officers were dispatched to 120 E. McClung, the Stripes convenience store (Valero gas station), for a possible intoxicated subject. Reserve officer Nancy Reddick, who was off-duty observed a female who appeared intoxicated at the store and Reddick was afraid the subject was going to drive away in her vehicle. Officers arrived on-scene and made contact with Lisa Vela, W/F/09-23-1984. Officer Elliott Martinez advised in his report that Vela appeared to be intoxicated and checked wants/warrants on Vela. Lisa Vela showed an active warrant out of Nueces County. The warrant was confirmed and Vela was arrested by Officer Martinez. She was transported to the Aransas Pass holding facility and booked without incident. Jail checks were performed at 0300, 0400 and 0500 hours with all reports showing that the four prisoners were ok. At 0900 hours, the check showed a check mark in the ok column. At approximately 0917 hours, Cpl. Frank Kent and Officer Jordan Lusk entered the booking room to fingerprint and photograph Vela. Cpl. Kent entered cell number 4. Vela, who was the sole prisoner in cell 4, was awake and responsive. Cpl. Kent noticed a Sprint LG cellular phone in her possession and she appeared to be receiving a phone call. He confiscated the phone and turned it over to Sgt. D. Anders. Cpl. Kent instructed Vela to exit the cell. He observed that she was very unsteady on her feet and swaying. Vela stood in front of the height indicators as instructed; however, Kent held the number placard for her as he was concerned for her safety due to her difficulty maintaining balance. Kent then instructed Vela on the procedures for signing the fingerprint cards. She began to sign but first requested to use the restroom. Kent allowed Vela to use the restroom in the cell. While in the cell, she came to the door and requested toilet paper. Officer Lusk retrieved a roll of toilet paper and gave it to Vela. Vela exited the cell. Kent again showed her where to sign the fingerprint cards. At this time, Kent took the camera and left the processing area to return the camera to the receptionist area. When he returned to the processing area, Vela had not yet signed the fingerprint cards. She was standing in front of the desk looking at the cards. Kent again instructed Vela to sign the cards. She asked how she was to be certain that she was only signing for fingerprints. Kent showed Vela the statement on both cards which reads "Signature of person fingerprinted". Vela appeared satisfied and signed both cards. Kent gave the cards to Lusk, who began to fingerprint Vela. Kent stepped out of the processing area momentarily and when he returned, it appeared Vela was being uncooperative during the fingerprinting. Kent told Vela that she needed to comply with the fingerprints so she could be magistrated and transferred to county. Lusk finished the local fingerprint card. Kent took the fingerprint card to dispatch as Lusk continued with fingerprinting on the CR-43. When Kent again returned, Lusk had completed the process and Vela was cleaning the ink from her fingers. Vela was placed back in cell 4 where she asked Lusk for a cup of water and the time. Lusk gave Vela a cup of water and advised her that the time was 0933 hours. At approximately 11:00 a.m., Cpl. Kent reported to the Aransas Pass Police Department to assist in magistration of arrestees. Kent contacted Judge Donna Cox at the Municipal Court Office and escorted her to the holding facility. Judge Cox wished to magistrate Lisa Vela, 09/23/84, for Nueces County Warrant CR090033614. Kent opened cell door number 4 and saw Vela laying in a supine position against the west wall of the cell, her right arm was extended out, palm up, her left arm was bent at the elbow with her left hand near her neck. Cpl. Kent advised that he initially thought Vela was sleeping. Kent advised that he approached her and called out her name. She was unresponsive, so he reached out and gently took hold of her left wrist. It was at this time that he advised that he noticed discoloration in her arms and what appeared to be a small amount of vomit under her right cheek. He immediately notified Judge Cox that he believed that Vela was deceased. Kent then notified Captain R. Gonzales. Capt. Gonzales, Detective Sgt. Martinez and Det. Sgt. Flores took control of the scene. Kent instructed dispatch to notify EMS and the Justice of the Peace Charlene Lewis. Capt. Gonzales notified the Texas Rangers. EMS arrived on scene and were instructed them to minimize disturbance of the scene if possible. They began the medical evaluation including an electrocardiogram which showed no response. Texas Ranger Tony DeLuna arrived and immediately assumed responsibility for the scene and the subsequent investigation. Justice of the Peace Charlene Lewis pronounced Vela dead at 12:05 p.m. Autopsy results are still pending.

A father is speaking out about the bizarre death of his daughter.  That man's daughter, 27-year-old Lisa Vela was in police custody at the time of her death.

The young woman's body was found Friday morning in a holding cell at the Aransas Pass police department.  In a strange twist of fate, Lisa Vela was arrested on her birthday, but instead of planning a party, her father is now planning her funeral.  Ernest Vela told 3 News, "I know we'll get to the bottom of this.  I need to know what really happened to her."

Police say 27-year-old Lisa Vela was picked up around 3 Friday morning at a convenience store on a DWI warrant out of Nueces county.  She was taken back to the Aransas Pass City Jail.  It was later that morning about 9:30 a.m. when she was taken out of her cell to be finger printed.  She appeared to be fine according to authorities. Just an hour later, jail officials discovered her unresponsive in her cell.

3 News visited with Ernest Vela at Charlie Marshall Funeral Home as he plans his daughter's burial.  He says Lisa was a good daughter who took care of him.  Vela says he is heartbroken, but relying on his faith to get him through.

Vela said, "She was real attached to me.  I love her so much.  The good Lord will have to take care of everything now."