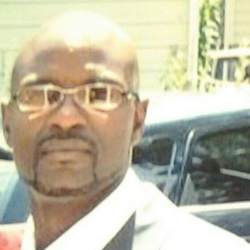 Linwood Raymond Lambert Jr. died after officers stunned him with a taser on May 4, 2013 after taking him into custody at the Super 8 Motel on U. S. 58 in South Boston, according to the lawsuit filed April 29 in U. S. District Court in Danville.

The lawsuit alleges during the early morning hours on May 4, 2013, an unarmed Lambert agreed to go with police officers to Halifax Regional Hospital for treatment of an apparent medical/psychiatric condition. After arriving at the hospital, instead of bringing him inside, the suit alleges officers tasered him multiple times outside the emergency room doors and left the hospital grounds with him.

As the officers pulled up to the hospital, Lambert kicked out the squad car window.

Video from inside the car shows officers yelling at him to stop. When they cracked the passenger door, Lambert jumped out, sprinting roughly 20 feet towards the ER entrance and crashing into the building’s glass doors.

The officers ran after him and began tasing him. In response, Lambert’s body goes stiff and, with his hands cuffed, his arms could not break the fall when he hit the cement. The three officers surrounded him on the ground.

One ordered him to “stay down;” another, Officer Bratton, told him, “Every time you get up, I’m going to pop you.”

Lambert told them, “I didn’t do nothing,” and can be heard moaning in the recording. The officers tell Lambert to lie down, stay down, get on his belly, and roll over – while warning they will taser him again.

“I’m going to light you up again – roll over, roll over, turn over!” Bratton says.

Lambert remained on the ground, saying OK, but the officers tased him again. They restrained his legs with shackles.

Then, as Lambert appears subdued on the video, the officers warned Lambert they would taser him again. “I’m going to hit you again,” Bratton tells him.

Then Lambert says, “I just did cocaine.”

For the first time that night, officers tell Lambert he is under arrest, calling it in for disorderly conduct and destruction of property.

As videos from the hospital and police cars show, the entire scene plays out right in the doorway to the ER, with nurses and hospital staff watching. But then the officers make a fateful decision – to take Lambert away without getting him medical care, the original reason they took him into custody.

Instead, they hauled him back into the squad car and began a new round of tasing.

Police video shows Lambert shackled and subdued in the car, apparently restrained, as officers warn him again and tell him to sit up.

“Act like you got some sense,” says one officer. Another warns, “sit up or I’m going to tase you again.” Reaching into the car with two Tasers, the officers tase Lambert as he slumps down in the seat.

At one point, Officer Clay made contact with Lambert’s neck inside the car, and the officers discuss whether Lambert was trying to bite him. The video does not appear to show a direct bite occurring. Clay went to the ER later that morning, at 7:35 a.m., to get treatment “for a possible bite,” according to police records. In his incident report, he writes that Lambert “was biting at me.”

In addition to the video, nurses on the scene say they saw “three officers” tasing Lambert “at one time,” according to hospital records obtained by MSNBC.

A single, 5-second Taser discharge carries 50,000 volts and generally incapacitates a person, because it temporarily turns the human body into an electricity conductor. Law enforcement experts caution against repeat tasings.

Yet the three officers discharged their Tasers a total of 20 times over roughly half an hour. (The figures are from company device reports issued by Taser International, obtained by MSNBC.)

Those discharges amount to roughly 87 total seconds of potential tasing – a level capable of inflicting serious injury or death, according to federal guidelines. While the videos clearly show multiple tasings connecting with Lambert, not every recorded discharge necessarily makes human contact.

Most of those discharges were from Officer Bratton, who used her Taser 15 times, including 10 times in a two-minute span.

When the final tasing inside the car ended, Officer Clay drove Lambert back to the jail, and Officer Bratton drove back separately.

Officer Mann remained briefly at the hospital, where he was recorded talking to a hospital worker, who asked if the police were going to bring Lambert inside.

“We were,” the officer said, chuckling, “now he’s going to jail.”

“He’s bleeding like a hog,” he said, “we thought he was crazy, and then he finally told us he was on cocaine.”

As the officers make the short drive to jail, the squad car video shows Lambert unconscious. The officers notice his state when arriving at the jail, where they checked Lambert’s pulse, attempted CPR and called for help.

Then an ambulance came and took Lambert back to Sentara Halifax Regional Hospital – the same ER the officers had originally brought Lambert to for treatment.

Hospital records show Lambert was flatlined on arrival at 6:06 a.m. – just over an hour after his trip with police began. He was pronounced dead at 6:23 a.m.

Obvious questions are being asked about why Lambert was repeatedly tasered even after he was on the ground and his feet had been shackled, as well as while he was placed back inside the police car. He apparently was also shocked by more than one taser at a time. It’s also being questioned why he was denied medical care after the incident, especially since that was the original reason for him being taken into custody by the police and the incident happened within the doorway of the hospital emergency room.

Lambert’s family reports they were not provided with any details about his death or what led up to it until after their lawsuit forced the police to release the video.

March 2016 Lambert family to get their day in court