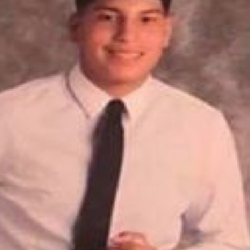 Officer Tiffany Ngalula with the Glendale Police Department said officers responded to an industrial area near 67th and Northern avenues around 2:45 a.m.

The first officer on the scene reportedly saw multiple people firing into a crowd of about 200 fleeing people. The crowd was gathered for an illegal party, police said.

The officer fired his weapon four times at one of the shooters, a 17-year-old, Ngalula said.

Police initially said the 17-year-old was among the people who were firing into the crowd, but Ngalula later said that police will provide more information confirming whether he fired his weapon and how many times.

The 17-year-old was given medical aid but was pronounced dead at the scene. A firearm was located in his possession.

The officer was not injured. The 17-year-old was identified as Levy Isaac Madueno Santibanez.

Ngalula later said that detectives on the scene located at least 60 rounds of spent bullets from at least five different firearms.

As other officers arrived, an officer approached a car at the scene. The driver of the car hit the officer with the vehicle. The officer pursued the suspect's vehicle.

The vehicle was located with other witnesses inside, but the driver and the front passenger fled on foot and was not located. The pursuit ended near 81st and Glendale avenues.

The officer had minor injuries from being struck by the vehicle.

Friends of the victim say he was holding his cell phone which police mistook for a gun. They claim he was running away from the police when the officer shot him in the back. Glendale PD claims the teen had a gun, had been firing into the crowd, and it was found on his person following the shooting. Teenagers videoed the police shooting him 5 times in the back while he was running away.