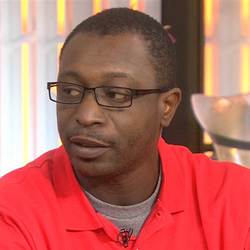 Levar Jones survived being shot by a police officer as shown in the shocking video embedded here.

One moment, a man reaches into his vehicle after a South Carolina trooper asked for his driver's license. Seconds later, the trooper shoots him, and the man asks why. Days afterward, prosecutors aren't satisfied with the answer. Authorities released dash-camera video Wednesday showing what they say is Sean Groubert, a decorated South Carolina Highway Patrol trooper, shooting Levar Jones, who was unarmed, in the parking lot of a gas station just outside Columbia on September 4. Jones, 35, survived the shooting. But Groubert, who has since been fired for the incident, has been charged with aggravated assault and battery, a felony that could get him up to 20 years in prison if convicted, the South Carolina Law Enforcement Division said Wednesday.

Ex-trooper Sean Groubert, 36, pleaded guilty to shooting and wounding Jones, a court spokeswoman said on March 14, 2016. Groubert admitted assault and battery "of a high and aggravated nature" and faces up to 20 years in prison when he is sentenced, said Fifth Judicial Circuit spokeswoman Nicole Holland.