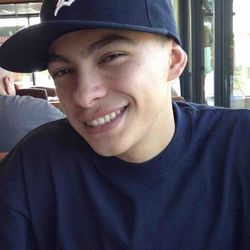 Leonardo Hurtado Ibarra, 25, was shot by San Diego police officers when he allegedly pulled a gun on them near El Cortez hotel and died of his injuries two days later, police said.

The events that led to the fatal gunfire began about 5:45 p.m. Saturday, when SDPD Officers Jonathon Lucas and Tevar Zaki saw Ibarra leaving a building on the west side of the street and decided that he resembled a suspect in a June 21 robbery due to his distinctive facial tattoos, Lt. Matt Dobbs said.

As the patrolmen approached Ibarra, he walked away from them to the south. He then dropped some things he was carrying and allegedly pulled a revolver wrapped in a bandana from his waistband and pointed it at one of them, prompting both officers to open fire.

On Sunday, protesters gathered near the site of the confrontation to protest the shooting, then marched to police headquarters at 1401 Broadway to continue the demonstration.