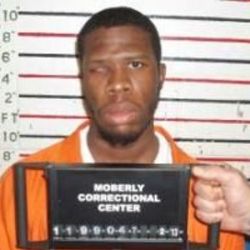 A St. Louis cop shot and killed an armed felon Tuesday — six years after another officer shot the man in the leg. Ledarius D. Williams was armed and struggled with two patrol cops before one of the officers fired, St. Louis Police said. The 23-year-old was released from prison in March after serving six years for assaulting a cop. In 2009, he pointed a gun at two officers, prompting one of them to shoot his leg, the St. Louis Post-Dispatch reported. On Tuesday, the cops approached Williams as they patrolled the Dutchtown neighborhood. When the 23-year-old saw the officers, he ran, Chief Sam Dotson said. The two cops — a 24-year-old and a 29-year-old — followed, and found him hiding in some bushes. One of the cops noticed the suspect had a gun, and the three struggled for the weapon, which had been stolen in 2013, police said.